Every one of us has probably experienced at least once this mixed feeling of loss and frustration over the inability to articulate or find the exact word that conveys how we feel. This very feeling that I have just tried to describe, which has no particular name in English, perfectly illustrates the subject of this article; the limits of one single language to cover the extensive emotional range of human beings. The absence of a word – noun, adjective or verb – for what you are experiencing may sometimes give you the impression that you are the only one to deal with it, but you may be happy to find out that being multilingual can actually alleviate this frustration. Let’s have a look at five foreign words that perfectly express some subtle nuances that would be lost in translation:

Right next to l’appel to vide (literally the “call of the void”; the sudden, instinctive urge to jump when on the edge of a cliff or any high place), this one is probably one of the most-known French expressions in English. Literally translated by “staircase wit” (or afterwit), it was first coined by Denis Diderot in Paradoxe sur le Comédien when the answer to one of his friend’s remark, which left him speechless at the time, only came to his mind once he walked down the stairs. The phrase indeed refers now to that well-known feeling you experience when you think of the perfect witty comeback only after the conversation has ended, when bringing it back would appear as if you were trying to prove yourself (that does sound familiar, doesn’t it?) Talking about embarrassing yourself, this leads us to our second word of the day: 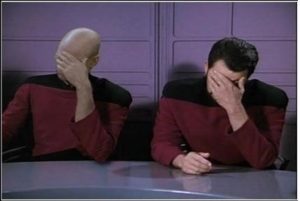 This one, which could this time be quite accurately translated by second-hand or vicarious embarrassment, describes that feeling of shame you get when you watch someone else be humiliated, laughing nervously or dying to hide yourself behind anything within reach as if you were the one personally experiencing the humiliation… Awkward, right? Especially when you are forced to watch some cringe-worthy videos of people embarrassing themselves, or hear a friend’s joke that falls completely flat. Actually, some studies on human awkwardness found out that, while the latter may be a very unpleasant feeling that refrains us from reproducing the action that caused it, it can also come in very handy, since embarrassment also tends to be perceived as a sign of trustworthiness and may help others forgive you more easily. Vicarious embarrassment, on the other hand, does not necessarily mean that you would feel as embarrassed if you happened to be in the other person’s shoes; it simply is usually related to a greater predisposition to empathy. So good news, don’t be too embarrassed to feel embarrassed! (You can read this article for more information if you are part of the lucky circle of vicariously awkward people). 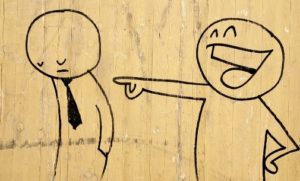 Pena ajena, which seems to have a pretty close equivalent in German with fremdscham, quite naturally leads us to the almost opposite feeling that German speakers would call Schadenfreude (loosely translated as “malicious joy”, literally as “harm joy”). The word, which may sound more familiar because also borrowed by English speakers, conveys that sense of pleasure derived from other people’s misfortune or failure. Even though it may not be easy to admit, we can probably all remember gloating at a know-it-all classmate failing an exam. And while you can now take further pleasure in it knowing that we all experience it somehow, it may still be useful to know, in case you are the one being gloated at with a schadenfroh smirk, that this feeling is more likely to be experienced by people with low self-esteem issues.

A friend has recently drawn my attention to the high number of untranslatable Japanese words. They can range from feelings (yoko meshi, literally meaning “a meal eaten sideways” and referring to the panic you feel when trying to speak a foreign language, to quirks and habits that we have all around the world. Did you know that the Japanese even have a word, boketto, to describe the act of staring vacantly into the distance, devoid of any thoughts? To all the book lovers out there who are not familiar with the word yet, I must also mention Tsundoku, which describes this compulsive habit of buying tons of books that are typically piled up together and left unread – although that last part may not always be true. To come back to Koi No Yokan (literally premonition of love), the expression designates the feeling that you may have upon meeting someone for the first time that you will both fall in love at some point. The expression differs from love at first sight, as it does not imply an instant attraction or love, but the potential or prospect of future love.

Romance was short-lived, as we are getting to a new level of unpleasant-spookiness and irrational fear with this one. Yuputka in Ulwa, a Native American language spoken in Nicaragua and Honduras, does not really refer to a feeling but more to a phantom sensation you sometimes have – especially if you are the type who takes strolls into the woods at night or sleep under the stars – that something is crawling on your skin… You probably had goose bumps just reading those words. This tactile hallucination can be a symptom of a medical condition called formication in some cases, but these sensations might just as well mean that you have read one too many Lovecraft’s short stories. When we look at it, human obsession and repulsion for insects is fascinating; some scientists see it as a primal fear and explain this predisposition to entomophobia, and especially arachnophobia, by the danger that venomous spiders represented for our ancestors in their natural environment. However, the hypothesis that insects bugging us (no puns intended) has more to do with disgust – and especially the association with food spoilage – than phobia seems more likely (see this article).

An almost infinite number of words could have made the list if we consider the 6500 – some may even say 7000 – languages that are spoken around the world. But instead of listing all the words potentially untranslatable in English, we should also mention some projects undertaken by individuals such John Koenig, the creator of the new Dictionary of Obscure Sorrows. If you have not heard of it, the latter is a somewhat gloomy but nonetheless interesting attempt to start filling the gap between English language and the range of human emotions. Have a look at the website to find out the innovative nouns given by its creator to feelings such as “the longing for the clarity of disaster” (lachesism), “the awareness of how little of the world you’ll experience” (onism) or “the realisation that each random passerby is living a life as vivid and complex as your own” (sonder).