The struggle of proper names translation

Based on the proper names’ translations in the saga Harry Potter

Facing the issue of translating proper names from a language to another is not something that happens invariably. It is a rare situation that occurs only in a few occasions: for the translation of books, tales, movies, plays, etc. In other words, proper names are translated only when fictional universes are concerned.
It is clear that they will never be translated in a Court decision, a diploma or a user manual, for those kinds of documents have to reflect the truth as much as possible. As a reminder, (according to Jonasson, 1994) there are two kinds of proper nouns: the “pure” proper nouns which don’t give information about the person, and the “mixed” or “descriptive” proper nouns, which on the contrary give information about the character or about one of their peculiarities.

Translating proper names is an art that should not be underestimate. Once you are certain that a name has to be translated, make sure that you do it properly. The main kind of proper names that should always be translated are the descriptive names, which usually include puns.
Let’s take the example of Madeye Moody [French Maugrey Fol-Oeil, Spanish Ojoloco Moody, Italian Malocchio Moody] and his glass eye, the nearly headless Nearly Headless Nick [French Nick Quasi-Sans- Tête, Spanish Nick Casi Decapitado, German Der fast kopflose Nick] or Fang, Hagrid’s hound [French Crockdur, Italian Thor, Polish Kieł]: their names describe their physical peculiarities and give a touch of humour to the name.

Besides, names also usually – I know this is a very controversial question, and there are several schools of thought – need to be translated in order to sound authentic in their different target languages. Imagine the kids from everywhere in the world reading Harry Potter if the proper names were in English: there are many subtleties that they might not completely get, even not at all, and so the book would lose a lot of its charm.
But here comes the tricky part – that I have already mentioned above – with the two types of proper names: not all proper names are to be translated!
In most languages, the full names of Harry, Hermione and Ron remain the same, except for a few exceptions – which I couldn’t explain as I don’t master all the languages of the world, though I presume it might come from purely linguistic or practical reasons in the target-language. There is no actual rule, but we can say that in most cases, names to be translated are only the distinctive names.
The translation of proper names can go very far in the process, let’s just take the example of Lord Voldemort’s “real” name, Tom Marvolo Riddle, which is the acronym of the sentence “I am Lord Voldemort”. All the translations also had to be an acronym in order to fit the story!

But then, you will say, why are there books whose characters’ names, although very funny or peculiar in the original version, are not translated as well in the foreign versions?
For this I am going to take an example that doesn’t come from Harry Potter but from the famous book by Jules Verne Around the World in 80 days, in which the valet of Phileas Fogg, Passepartout, keeps the same name in each language although his name (literally translated “sneaks everywhere”) actually fits the profile of the character.
This remains a mystery for me…

Take a look at the table below, it will give you a glimpse of the herculean task of the people who translated Harry Potter worldwide. And as I said, this is just an example, and translators all around the world have been certainly facing much bigger translational challenges to make their work match the initial story and most importantly, make sense. 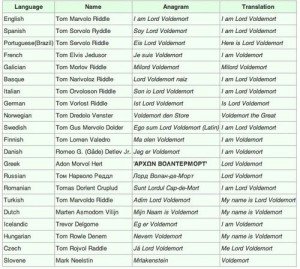