A Few Facts About the Mystery of Child Language Acquisition

The children’s development of language is an crazy phenomenon that takes place at different ages and speeds and which is amazing to observe. Some people tend to think that language and communication are abilities that are normally developed several months after the birth of a child. In reality however, children are already able to hear voices, noises and even music way long before…

In this article, we are going to explain a little bit more in details the language acquisition process of children, which is more complex than we may think, but also more fascinating.

Some research on this matter has been carried out measuring the different reactions of newborns to their auditory environment.
According to this research, newborns seem to be able to distinguish not only their own mother’s voice from other voices, but also all the voices and music they have heard more frequently while in the uterus – by the way it has also been proved that letting a baby listening to music in their mother’s womb may have positive effects on their future mental development… but also on the mind of the mother, who at the same time enjoys the music!
Moreover, they seem to appreciate human voices and conversations in their mother’s language more than “indistinct” noises, although you might say that they don’t know any language yet – and this precisely is mind-blowing! This aspect is particularly interesting when it comes to bi-national parents, speaking two different languages on their everyday life; what happens then?
Other research showed that bilingual kids tend to develop more skills than “normal” children, but this is another topic.

At the beginning of their lives and this since their first seconds, all newborns have only one way to communicate, which is crying. Crying is an innate ability that begins to be diversified already in the first weeks of life, in order to express different kinds of needs and emotions, such as hunger or pain.
Another interesting innate ability of newborns is that of smiling. We know that they don’t really have a reason, being not yet capable of understanding and assimilating positive feelings rationally. Still they can feel these positive feelings and offer huge smiles to whoever may be here at the moment – so don’t panic if your 2-weeks nephew keeps crying when you’re around: it doesn’t mean he’s already mad at you! 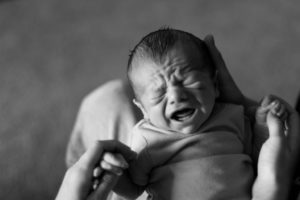 After a few months, babies normally start to interact using gesture and facial expressions in order to show basic feelings like hunger and pain (but with a wider choice of ways to do it than previously) or fatigue, curiosity, joy or satisfaction. They now understand when people call their name, and respond to it and to other human voices by turning their head, their eyes or moving their body.

Babies normally articulate the first sounds (usually vowels) and syllables between six and eleven months. They begin to play with their voice, with its intonation, peak, tone and create the first words consisting in the repetition of the same syllables. At that time they also understand what “yes” and “no” mean.

From twelve to eighteen months, babies produce their first words with meaning and begin to follow simple instructions. Their vocabulary grows quickly although they tend to repeat the same words over and over. 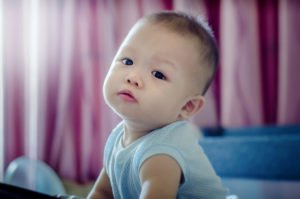 After two years, the first phase of language acquisition ends. At this point, children are able to combine words in their first short sentences using a vocabulary of more or less 150-300 words.

The vocabulary and language skills develop rapidly until children are eight years old, but the way of expressing changes until adulthood (18-19 years). This period is particularly important for the language acquisition process of children for at that time they build not only their vocabulary but also their personality. It is good to surround them with learning opportunities, and open their mind to as many things as possible. Not only their vocabulary will develop but also their sensibility and thus their intelligence.

As a conclusion, we will remind that even if at the beginning of their lives all newborns are able to produce the sounds of all natural languages of the world, slowly they seem to lose this ability to focus on one language.
This is one of the reasons why the best way to learn a foreign language is to start during childhood, when they have the more abilities to assimilate the new language and its structure.
And as said before, cultivate this interest! The more a kid learns, the better he will grow. 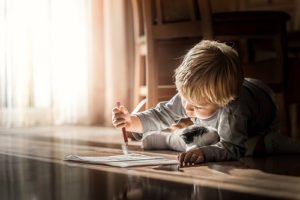