What is the Best Dictation Tool? And Is It Worth Paying For?

The idea of commanding a machine with your voice has been a dream for many ever since the concept had been introduced into science fiction in the 1950s/1960s. A door that opens with just a single word, a radio that’ll play whatever you tell it; this immense control with just your voice was the subject of dreams, but now is very much a reality. With the introduction of technologies like Alexa and the voice in your pocket that is Siri, there are endless possibilities for what voice commands could do. The obvious tool, and the one we are discussing today, is a dictation tool. A dictation tool can turn your speech into text. There are a lot of apps available to download on your phone, some free and others not. Is it worth spending money on it?

Let’s find out by comparing a free app, and an app that is paid for.

I will be talking about apps on iOS (iPhone/iPod/iPad) as that is what I own.

First is the free app, Siri.I mean you do have to buy a €400 iPhone but other than that investment, it is free. Siri is a vocal recognition software that comes pre-installed on all iPhones since the iPhone 4S. Essentially it is a personal assistant that can help you with navigating your phone and the internet. It is a very handy tool if you want to quickly change a setting, or set a reminder for yourself. But when it comes to using it as a dictation tool, Siri can be very unreliable. It has a tendency to not pick up what you are saying which can leave you with something like this: 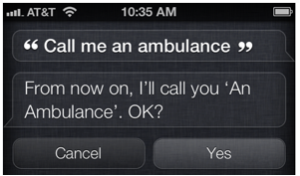 Also, it doesn’t have a designated space for dictation. You would have to ask Siri to put it in notes, which is quite cumbersome. It works as a dictation app, but it is not its primary purpose. Siri is primarily for small tasks like googling, and making little notes to remind yourself later.

But what about an app that is specifically designed to dictate?

Speech Recogniser is one of the most effective apps for dictating. Not only does it dictate word by word without fail, it also can translate the text you dictate into up to 40 different languages. It can translate your text into languages like French, German, Greek, Hindi, Hungarian, and Spanish. Once you install the app you just choose your source language and then press the start button to activate dictation. When you have a text that you have dictated, Speech Recogniser can then send it as a message on Facebook, as a tweet, and as a regular message. 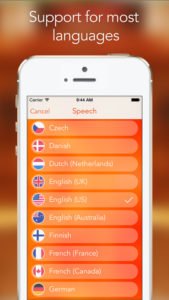 The only drawback is that it costs €10 on the App Store. While Siri is free.

I think Speech Recogniser is far superior as a dictation software because of the many bells and whistles I mentioned above. But if you are short on cash, Siri, while cumbersome, can serve you fine.